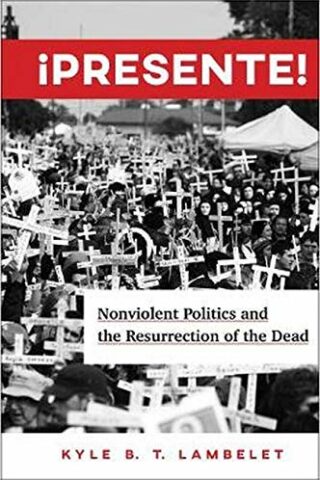 ¡Presente! develops a lived theology of nonviolence through an extended case study of the movement to close the School of the Americas (also known as the SOA or WHINSEC). Specifically,it analyzes how the presence of the dead—a presence proclaimed at the annual vigil of the School of the Americas Watch—shapes a distinctive, transnational, nonviolent movement. Kyle B.T. Lambelet argues that such a messianic affirmation need not devolve into violence or sectarianism and, in fact, generates practical reasoning.

By developing a messianic political theology in dialogue with the SOA Watch movement, Lambelet’s work contributes to Christian ethics as he explores the political implications of the resurrection of the dead. This book contributes to studies of strategic nonviolence and civil resistance by demonstrating how religious and moral dynamics remain an essential part of such struggles.

“In our cynical and morally impoverished times, Kyle B. T. Lambelet demonstrates that non-violent political action is effective because it is moral. ¡Presente! is a deeply researched, cogently analyzed work that shows how a religiously motivated social movement emerging from the left can make a difference. It offers much to think about and a ray of hope.”—Lesley Gill, professor, department of anthropology, Vanderbilt University

“Lambelet develops a compelling analysis of the history and practice of the movement that emerged to make visible the School of the Americas (SOA). Lambelet challenges the ways both secularist social theorists and Christian theologians have understood nonviolence by setting out a political theology of nonviolent direct action that locates it as a tradition of practical wisdom grounded in a messianic horizon. In doing so, Lambelet makes a signal contribution to the growing literature at the intersection of Christian ethics, ethnography, and political theology.”—Luke Bretherton, professor of theological ethics and senior fellow at the Kenan Institute for Ethics, Duke University

“In the last generation and especially on the left, there has been a tendency to minimize religious particularity in public campaigns (which is understandable, given the nation’s changing demographics). Pastors, laypersons, and secular activists alike will therefore be interested in Lambelet’s contention that Christian convictions about the resurrection of the dead might still leaven movements for justice in an increasingly post-Christian United States.”—The Christian Century, 8/7/2020

“Those interested in scholarly reflection on political theology and religiously based social change will find Lambelet’s book an excellent addition to the literature.”—Choice

“This book would serve as an excellent text for university students, in light of its thought-provoking topic, the deep analysis that is clearly laid out for the reader…Lambelet creates a space for readers to engage with fundamental questions of faith, solidarity with the oppressed, the power of liturgy, hope in resurrection, the place of the martyrs and the practice of nonviolence.”—Catholic Books Review