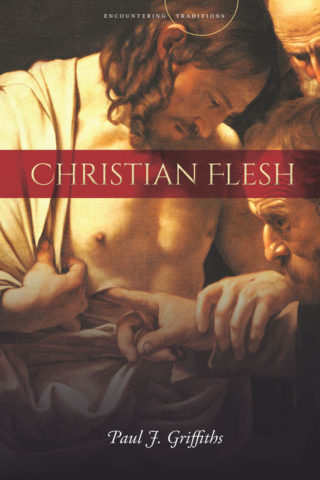 A sustained and systematic theological reflection on the idea that being a Christian is, first and last, a matter of the flesh, Christian Flesh shows us what being a Christian means for fleshly existence. Depicting and analyzing what the Christian tradition has to say about the flesh of Christians in relation to that of Christ, the book shows that some kinds of fleshly activity conform well to being a Christian, while others are in tension with it. But to lead a Christian life is to be unconstrained by ordinary ethical norms. Arguing that no particular case of fleshly activity is forbidden, Paul J. Griffiths illustrates his message through extended case studies of what it is for Christians to eat, to clothe themselves, and to engage in physical intimacy.

“Paul Griffiths, one of the few truly creative theologians of our time, has produced another brilliant and provocative work of speculative theology, demonstrating the centrality of the flesh to the mysteries and doctrines of the Christian faith and examining questions of the greatest significance today and always.”
—Carol Zaleski, Smith College

“In this trenchant and careful theological treatment of our embodiment, Paul Griffiths puts the stress exactly where it should be put — on the possibility of transfigured touch. In doing so he does not shy away from the violence involved in all fallen caresses, nor the degree of caress that survives even in our violent touches. By focusing on the varieties of touch, he is able to untangle several unfortunate arguments between liberals and conservatives in a most refreshing way. One does not have to agree with all his conclusions to be immensely assisted by this book and grateful to him for writing it.”
—John Milbank, University of Nottingham

“As ever, Paul Griffiths is almost alarming in his lucidity and intelligence. Very few theologians can boast a comparable combination of profound questioning and precise reasoning. This is a book worthy of the most serious reflection, debate, and admiration.”
—David Bentley Hart, Notre Dame Institute for Advanced Study