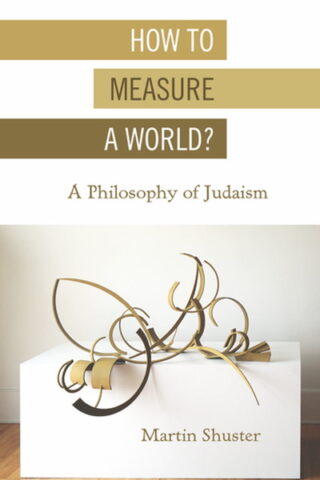 How to Measure a World?

What does it mean to wonder in awe or terror about the world? How do you philosophically understand Judaism? In How to Measure a World?: A Philosophy of Judaism, Martin Shuster provides answers to these questions and more.

Emmanuel Levinas suggested that Judaism is best understood as an anachronism. Shuster attempts to make sense of this claim by alternatively considering questions of the inscrutability of ultimate reality, of the pain and commonness of human suffering, and of the ways in which Judaism is entangled with the world. Drawing on phenomenology and Jewish thought, Shuster offers novel readings of some of the classic figures of Jewish philosophy while inserting other voices into the tradition, from Moses Maimonides to Theodor W. Adorno to Walter Benjamin to Stanley Cavell.

How to Measure a World? examines elements of the Jewish philosophical record to get at the full intellectual scope and range of Levinas’s proposal. Shuster’s view of anachronism thereby provokes an assessment of the world and our place in it. A particular understanding of Jewish philosophy emerges, not only through the traditions it encompasses, but also through an understanding of the relationship between humans and their world. In the end, Levinas’s suggestion is examined theoretically as much as practically, revealing what’s at stake for Judaism as much as for the world.

“What Martin Shuster has done is to articulate—with skill, succinctness, and charm—how monotheism entails a philosophical story about meaning, and an ethical story about what we owe each other. It repays repeated readings, and each reading is a joy.”
~Martin Kavka, author of Jewish Messianism and the History of Philosophy

“Martin Shuster offers a fascinating reading of the Jewish philosophical canon in order to test the claim, first uttered by Levinas, that Judaism is an anachronism.”
~Aaron W. Hughes, author of Rethinking Jewish Philosophy

“Shuster’s passion for philosophical thought and his commitment to a better world, comes through in this insightful interpretation of ‘classic’ Jewish philosophical thinkers. Written with skill and ease, Shuster brings the work of these thinkers alive for even the casual reader of philosophy. Most significantly, he shows the enduring relevance of the Jewish philosophical tradition for the human struggle to find meaning in a world filled with ‘pain and suffering.’ In the end, this book inspires hope even in the midst of a broken world.”
~Kelly Brown Douglas, Bill and Judith Moyers Chair of Theology, Union Theological Seminary

“To measure a world means to adopt a stance toward it. As we are already in the world—and can never get out—our stance must be inside and somehow outside, just as it must be engaged, here and now, while attending to history: ‘everything matters.’ When understood in terms of space and time, the measuring stance is thus ‘anachronic,’ as Levinas once said, and Judaism, understood philosophically, is a ‘modality of the human’—indeed, an enduring expression of the demand of the anachronic. Martin Shuster’s remarkable study thereby opens a new path toward a philosophy of communication and critique through which we are all ‘a little bit Jewish.'”
~Bettina Bergo, Professeure titulaire, University of Monntréal

“An introductory study that will have enormous appeal for both students and non-specialist general readers, How to Measure a World?: A Philosophy of Judaism is as informative as it is thought-provoking, and very highly recommended”
~Midwest Book Review

“Overall, this book is a valuable contribution to not only modern Jewish studies, but also the broader field of continental philosophy of religion. With a clear mastery of his sources, Shuster carefully weaves his thesis through deeply complicated figures in a way that is both artful and textually sound.”
~Josiah Solis, Reading Religion