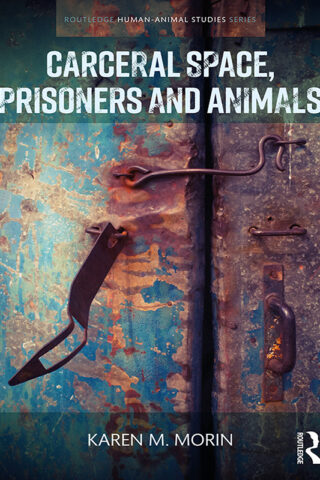 Carceral Space, Prisoners and Animals explores resonances across human and nonhuman carceral geographies. The work proposes an analysis of the carceral from a broader vantage point than has yet been done, developing a ‘trans-species carceral geography’ that includes spaces of nonhuman captivity, confinement, and enclosure alongside that of the human. The linkages across prisoner and animal carcerality that are placed into conversation draw from a number of institutional domains, based on their form, operation, and effect. These include: the prison death row/ execution chamber and the animal slaughterhouse; sites of laboratory testing of pharmaceutical and other products on incarcerated humans and captive animals; sites of exploited prisoner and animal labor; and the prison solitary confinement cell and the zoo cage. The relationships to which I draw attention across these sites are at once structural, operational, technological, legal, and experiential / embodied. The forms of violence that span species boundaries at these sites are all a part of ordinary, everyday, industrialized violence in the United States and elsewhere, and thus this ‘carceral comparison’ amongst them is appropriate and timely.