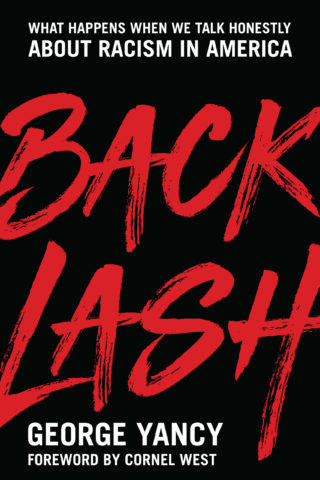 When George Yancy penned a New York Times op-ed entitled “Dear White America” asking white Americans to confront the ways that they benefit from racism, he knew his article would be controversial. But he was unprepared for the flood of vitriol in response.

The resulting blowback played out in the national media, with critics attacking Yancy in every form possible—including death threats—and supporters rallying to his side. Despite the rhetoric of a “post-race” America, Yancy quickly discovered that racism is still alive, crude, and vicious in its expression. In Backlash, Yancy expands upon the original article and chronicles the ensuing controversy as he seeks to understand what it was about the op-ed that created so much rage among so many white readers. He challenges white Americans to rise above the vitriol and to develop a new empathy for the African American experience.

“Direct and honest, Yancy’s delineations of white violence, white indifference, and white naïveté are both thoughtful and discomforting.” — Publishers Weekly

For all readers with the courage and care to act for racial and social justice. — Library Journal

“George Yancy’s courageous appeal to White America “to confront the problem of whiteness; to cultivate a critical awareness of the specter of whiteness and white privilege that each one of you inherits” elicited a remarkable range of responses, some hideous beyond words, some welcoming what he rightly called a “gift.” This eloquent meditation on the events and their meaning calls on us, with piercing honesty, to think hard, and work hard, to excise the malignancy of white supremacy from our culture and our lives.”  — Noam Chomsky

For a professional philosopher to communicate such deep rawness and suffering is, quite simply, astounding. — Tikkun Magazine

Searing, honest, and Unflagging in its pursuit of understanding.  — Foreword Reviews

“Although fighting racism is one of the beliefs of our liberal society, not only astute social critics but also thousands of “ordinary” people clearly experience the falsity of the predominant liberal dogmas. Yancy conclusively demonstrates how we should move far beyond the liberal attacks on alt-right neocons towards asking the key question: to what degree the conservative backlash was made possible by the silences and compromises of the liberal perspective itself. No politically correct language policy can effectively disturb actual relations of domination and power. For this fact alone, Backlash deserves to become a classic.”  — Slavoj Žižek

“Through his wisdom, his research, and his lived experience, George Yancy has provided us with a thought-provoking example of the impact of racism in America: personally and impersonally, individually and collectively. Yancy deconstructs racism in a powerful way, and deepens our understanding by sharing his personal experience. All Americans can learn from reading this text. White Americans, and for that matter members of any dominant group, should especially treat this book as a special gift.”  — Howard J. Ross, founder and chief learning officer of Cook Ross Inc., a diversity consulting company, and author of Everyday Bias and Reinventing Diversity