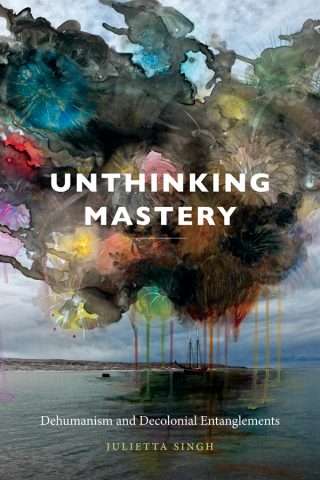 In Unthinking Mastery Julietta Singh challenges a core, fraught dimension of geopolitical, cultural, and scholarly endeavor: the drive toward mastery over the self and others. Drawing on postcolonial theory, queer theory, new materialism, and animal studies, Singh traces how pervasive the concept of mastery has been to modern politics and anticolonial movements. She juxtaposes destructive uses of mastery, such as the colonial domination of bodies, against more laudable forms, such as intellectual and linguistic mastery, to underscore how the concept—regardless of its use—is rooted in histories of violence and the wielding of power. For anticolonial thinkers like Fanon and Gandhi, forms of bodily mastery were considered to be the key to a decolonial future. Yet as Singh demonstrates, their advocacy for mastery unintentionally reinforced colonial logics. In readings of postcolonial literature by J. M. Coetzee, Mahasweta Devi, Indra Sinha, and Jamaica Kincaid, Singh suggests that only by moving beyond the compulsive desire to become masterful human subjects can we disentangle ourselves from the legacies of violence and fantasies of invulnerability that lead us to hurt other humans, animals, and the environment.

“Unthinking Mastery proposes dehumanism—a labor of language— as a pathway to social change and makes a contribution to the project of postcolonial theory as a theory of imaginative possibility.” — Michael Mulvey, Studies in 20th & 21st Century Literature

“Seeking new genealogies for decolonial acts and thought, Julietta Singh unknots the connections between stubbornly resilient mechanisms of rule and current forms of knowledge production. Singh sketches the disastrous consequences of the ongoing investments in mastery that result in a ravaged environment and persistent racialized hierarchies of being, thereby giving us a critique of the human, a glimpse of the decolonization of the human, and the promise of something beyond the human.” — Jack Halberstam, author of The Queer Art of Failure

“Notions of mastery have remained uninterrogated in theory for too long. No matter how reflexive we have become about other forms of power, mastery has been invoked as an essential good. Julietta Singh powerfully challenges this unproblematic invocation of mastery while revolutionizing postcolonial theory by fusing it with new materialism, animal studies, and queer theory. Balancing theoretical sophistication, textual nuance, and self-reflexive engagement with brilliance and care, Singh produces a powerful new theoretical synthesis that accounts for mastery and colonial violence in all their forms.” — Christopher Breu, author of Insistence of the Material: Literature in the Age of Biopolitics