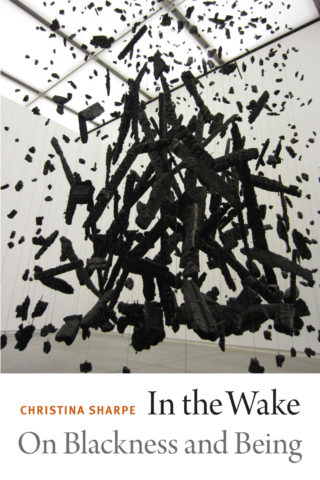 In this original and trenchant work, Christina Sharpe interrogates literary, visual, cinematic, and quotidian representations of Black life that comprise what she calls the “orthography of the wake.” Activating multiple registers of “wake”—the path behind a ship, keeping watch with the dead, coming to consciousness—Sharpe illustrates how Black lives are swept up and animated by the afterlives of slavery, and she delineates what survives despite such insistent violence and negation. Initiating and describing a theory and method of reading the metaphors and materiality of “the wake,” “the ship,” “the hold,” and “the weather,” Sharpe shows how the sign of the slave ship marks and haunts contemporary Black life in the diaspora and how the specter of the hold produces conditions of containment, regulation, and punishment, but also something in excess of them. In the weather, Sharpe situates anti-Blackness and white supremacy as the total climate that produces premature Black death as normative. Formulating the wake and “wake work” as sites of artistic production, resistance, consciousness, and possibility for living in diaspora, In the Wake offers a way forward.

“Christina Sharpe brings everything she has to bear on her consideration of the violation and commodification of Black life and the aesthetic responses to this ongoing state of emergency. Through her curatorial practice, Sharpe marshals the collective intellectual heft and aesthetic inheritance of the African diaspora to show us the world as it appears from her distinctive line of sight. A searing and brilliant work.” — Saidiya Hartman, author of, Lose Your Mother: A Journey Along the Atlantic Slave Route

“Christina Sharpe’s deep engagement with the archive of Black knowledge production across theory, fiction, poetry, and other intellectual endeavors offers an avalanche of new insights on how to think about anti-Blackness as a significant and important structuring element of the modern scene. Cutting across theoretical genres, In the Wake will generate important intellectual debates and maybe even movements in Black studies, cultural studies, feminist studies, and beyond. This is where cultural studies should have gone a long time ago.” — Rinaldo Walcott, author of, Black Like Who?: Writing Black Canada

“This could have been a one thousand page book, filled with ‘evidence,’ citations and systematic ‘proof,’ but instead it is an earned, slim volume of poetic, intellectual and, in fact, spiritual enactment of struggle. In this way, In The Wake is an effective, personal conversation with the reader that uses both fact, image, and emotion, legitimately, to illuminate argument.” — Sarah Schulman, Lambda Literary Review

“With In the Wake, Christina Sharpe looks out from the text and really tries to see us, both those here and gone, living and dead, in the wake, for all we are. We might begin, anew, by carefully looking back—double emphasis on care.”
— John Murillo III, Make Literary Magazine

“In the Wake is a necessary chapter in a lengthy tome of ending white supremacy.” — Jonathan Russell Clark, Literary Hub

“Mourning can be and has been a politics, but it must avoid becoming only a litany of horrors. Refusing melancholy in favor of care, In the Wakeunderstands mourning as a practice embedded in living, and vice versa. Sharpe’s beautiful book enacts this indistinctness through pulling language apart and putting it to new purposes.” — Hannah Black, 4 Columns

“The book that will live on in me from this year is Christina Sharpe’s In the Wake, on living in the wake of the catastrophic violence of legal chattel slavery.In the Wake speaks in so many multiple ways (poetry, memory, theory, images) and does so in language that is never still. It is, in part, about keeping watch, not unseeing the violence that has become normative, being in the hold, holding on and still living.”
— Madeleine Thien, The Guardian, Best Books of 2016

“In the Wake is work that holds space for what is unbearable and insists on letting it remain unbearable.”
— Johanna Hedva, Mask Magazine

“[A] masterclass on form, and a must-read for those of us committed to the beautiful sentence, as well as the work of what is commonly called theory.”  — Joshua Bennett, Poets & Writers

“Christina Sharpe [is] one of the boldest and most brilliant academics of our time. . . . In the Wake is one of those rare academic books at once rigorously argued and multiply engaging: intellectually, stylistically, emotionally.” — David Chariandy, Transition

“The present is saturated with grief about black lives in the wake of violence, being awake to the deaths and erasures can potentially create a future that can expand on being in the wake for more liveable lives of the black diaspora. It can also be the site of wake work, of attempts at creating social justice out of the metaphor Sharpe gives us…. Sharpe’s work has come at the right time.”  — Angelina Eimannsberger, Indulgence

“In the Wake is at times difficult to read – not because of the prose, which is superb, but because of the unending tragedy. Yet the book leaves the reader energized. Works of intellectual daring tend to do this. They point the way to further inquiry and further feats of the imagination. The book kept reminding me of William Faulkner’s line: “The past is never dead. It’s not even past” (Requiem for a Nun) and anyone who reads it will revel in the intelligence, the lyricism, the research, and understand that the wake work has just begun.” — JJ Amaworo Wilson, PM Press blog

“[A]t once meditative and theoretical, stylistically meticulous and spacious, intensely personal and a work of assembly.” — Matt Hooley, Antipode

“Sharpe’s project operates as a praxis of attendance that requires one to be with and to carry—not to watch, but to hold—the present traumas and indignities forced upon Black people and to simultaneously persist, to insist Black life, expression, love, and future in and through the wake of deliberate antiblack trauma that is ?rmament, soil, water, and climate.” — Elizabeth J. Cali, Papers on Language and Literature

“Sharpe’s poetic and accessible prose can serve as a model for anyone who wants to challenge traditional conventions of academic writing. This book is perfect for a graduate seminar about ‘The Black Atlantic’ and complements texts by Toni Morrison, Charles Johnson, Frantz Fanon, and Claudia Rankine. With the continued and encouraged proliferation of black death in the global diaspora, Sharpe’s study will, hopefully, usher in more woke scholarship that questions pervasive antiblackness.” — Dana Horton, Lateral

“One of the gifts of this book is Sharpe’s dexterous handling of orthography; wake comes to have multiple meanings, including the trail of waves of a ship as a metaphor for ongoing traces of the violence of slavery as well as the period of sitting and tending to the dead.” — Jocelyn Fenton Stitt, Meridians

“My most valuable discovery [in 2018] was the work of Christina Sharpe, a scholar of breathtaking range whose most recent book is In the Wake, about the aftershocks of chattel slavery in the Americas.” — Parul Sehgal, New York Times