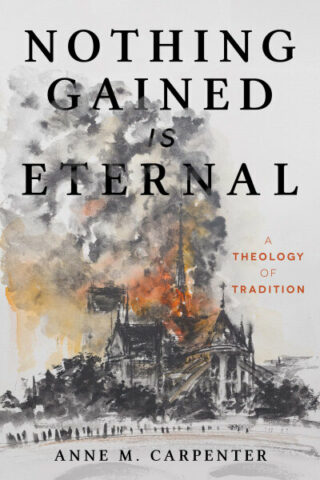 Nothing Gained is Eternal

In the decades since the declaration of the “end of history,” the West has been reminded time and again that history is not yet done with us. Time marches on, but the past keeps pace. The twin questions at the heart of the last two hundred years of philosophy and theology–What is history? What is tradition?–are more pressing now than when they were first posed. While most answers to these questions are methodological and descriptive, Nothing Gained Is Eternal presents an answer both theological and theoretical, an answer rooted in action, memory, and freedom.

Drawing on the thought of some of the brightest lights of the twentieth century, such as Bernard Lonergan, Charles Péguy, Maurice Blondel, and Hans Urs von Balthasar, Anne M. Carpenter argues for a new theory of tradition. It is a theory firmly moored to the ambiguities, contradictions, and varied fruits of the past. Carpenter shows ressourcement to be a way not only of retrieving the past but of making moral judgments about both a former age and our own. The resulting account of tradition pushes back against sentimental and triumphalist interpretations of Christian patrimony.

Yet, this work also identifies the ways in which theology’s turn to history is incomplete and confronts its own theory of tradition with decolonial criticism. Carpenter challenges readers to wrestle with whether tradition can persist when its colonialist practices are brought to light. And in asking this question, she offers hope for transforming the life of tradition in its wake.

“Throughout the history of Christian theology, the question of tradition repeatedly surfaces in times of crisis, and the greatest theologies of tradition arise from the response to these crises. Here one can recall the work of such leading lights as Irenaeus of Lyons, the Council Fathers at Trent, John Henry Newman, Johann Adam Möhler in the nineteenth century, and Yves Congar in the past century. The discourse around race and colonialism has pressed Christian theologians once again to take up the question of tradition. Nothing Gained Is Eternal grapples with this question, and what one finds is remarkable. Carpenter accessibly brings to the fore the problem of tradition and traditioning in the course of engaging several key thinkers–Maurice Blondel, Charles Péguy, Hans Urs von Balthasar, Bernard Lonergan, Shawn Copeland, and James Baldwin. What results is not a history or a chronology, but instead nothing less than a ‘constructive argument about the being of tradition,’ an argument surely poised to usher in a new wave of theological reflection on tradition. This book marks Anne Carpenter as a distinctive theological voice worth listening to. I recommend it highly.” –Grant Kaplan, Steber Chair of Historical and Systematic Theology, Saint Louis University

“Tradition is the act of passing on God’s self-revelation. But theology, Carpenter argues, has not sufficiently engaged its action. Carpenter’s metaphysic of tradition turns to its undersides, both its structure–the columns and beams inside its walls–and those on the undersides of history. Carpenter picks up where the twentieth-century authors of ressourcement left off, reading tradition through James Baldwin, M. Shawn Copeland, and Willie Jennings. Nothing Gained Is Eternal is methodologically inventive and ambitious, fully engaged with the theological tradition but refusing to follow the usual paths.” –Joseph S. Flipper, Mary Ann Spearin Chair of Catholic Theology, University of Dayton

“Anne Carpenter’s Nothing Gained Is Eternal builds bridges. It puts important schools of thought into conversation about the nature of history, race, sin, and God’s redemptive love. Early twentieth-century Catholic theologians meet contemporary theological critics of church and society, and the result is a provocative work of conceptual synthesis and prophetic insight.” –Andrew Prevot, associate professor of theology, Boston College, and author of Thinking Prayer: Theology and Spirituality amid the Crises of Modernity

“At once a celebration, a chastening, and an expansion of conventional formulations of religious tradition, Carpenter’s book takes on the ambitious task of integrating a chorus of voices which might not otherwise have had occasion to enrich (and correct!) one another. The book unites detailed theological and philosophical analyses of history and temporality with an exhortative call to action against dark forces of racism and colonialism which shadow Christianity’s past and present, making a compelling case that future systematic reflection on Christian tradition ought to be reconfigured to account for a direct confrontation against those powers and principalities.” –Jennifer Newsome Martin, associate professor in the department of theology and the Program of Liberal Studies at the University of Notre Dame, and author of Hans Urs von Balthasar and the Critical Appropriation of Russian Religious Thought