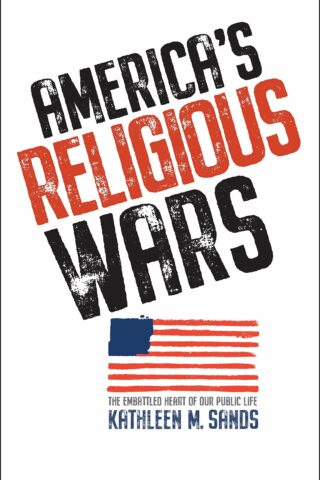 When Americans fight about “religion,” we are also fighting about our conflicting identities, interests, and commitments. Religion-talk has been a ready vehicle for these conflicts because it is built on enduring contradictions within our core political values. The Constitution treats religion as something to be confined behind a wall, but in public communications, the Framers treated religion as the foundation of the American republic. Ever since, Americans have translated disagreements on many other issues into an endless debate about the role of religion in our public life.

Built around a set of compelling narratives—George Washington’s battle with Quaker pacifists; the fight of Mormons and Catholics for equality with Protestants; Teddy Roosevelt’s concept of land versus the Lakota’s concept; the creation-evolution controversy; and the struggle over sexuality—this book shows how religion, throughout American history, has symbolized, but never resolved, our deepest political questions.

“A new way of framing public debate that transcends the culture wars and forces us to grapple with the complexities of the actual interests, identities, histories, and desires at stake. A welcome and timely contribution from a scholar at the top of her game.”—Elizabeth Shakman Hurd, author of Beyond Religious Freedom: The New Global Politics of Religion

“This is an outstanding entry into the controversies surrounding religion in American life. Insightful, provocative, and accessible, it makes a powerful case for the obfuscation, ambiguities, even incoherence that stalk religion talk.”—Linell Cady, Arizona State University

“Kathleen Sands transcends false dualism and instead charges us to use conflicts as opportunities to reveal the living principles, the living heart, of our shared democracy. Her timely analysis is a refreshing and principled contribution to American democracy.”—Nathan C. Walker, co-editor of The Oxford Handbook of Religion and American Education

“In crystalline language and with a deeply informed historical sensibility, Sands traces the tangled intellectual roots of America’s religious wars, showing what a dreadful and consequential mess Americans have made of one of their ostensibly deepest social values.”—Robert Orsi, author of History and Presence

“Professor Sands offers a superb analysis of the foundation and separation paradigms that inform the American discourse over profound social and moral conflicts . . . [and] musters abundant historical evidence to make her principal points.”—L. Ali Khan, New York Journal of Books

“Here is a book I recommend . . . a resource for our current struggles to embrace religion as both an essential component of our national history and culture and also as an ever-present sticking-point in accommodating our diverse population in a land committed to both faith and freedom. . . . [An] excellent book.”—Dwight A. Moody, The Meetinghouse

“An intriguing historical and legal analysis of several major battlefronts that have ostensibly been fought over religion in the United States. . . . Sands’ work provides both important context and good discussion fodder for use in graduate and undergraduate classes on American religious history, social history, and jurisprudence. The book is of particular value in American Studies programs to help students wrestle with current tensions and better understand why they need to know the religious history of the United States, and particularly the role Protestants have played.”—Christina Littlefield, Reading Religion

“A tightly woven narrative that traces the genealogies of Euro-American religion as the basis for religious liberty. . . . I recommend this book to anyone seeking to know the current historical narrative of American history and religion. With no cumbersome or technical jargon, this book is accessible to both clergy and laity. Any student of history will enjoy and be challenged by Sands’s narrative of religion in America. Anyone seeking to broaden their historical views will appreciate Sands’s message.”—Roger A. Drinnon, Concordia