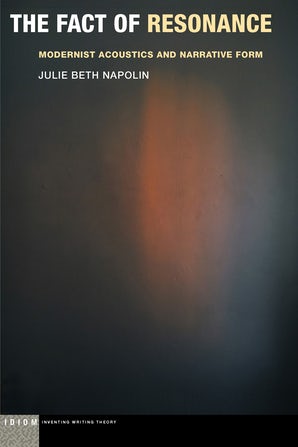 The Fact of Resonance

The Fact of Resonance returns to the colonial and technological contexts in which theories of the novel developed, seeking in sound an alternative premise for theorizing modernist narrative form. Arguing that narrative theory has been founded on an exclusion of sound, the book poses a missing counterpart to modernism’s question “who speaks?” in the hidden acoustical questions “who hears?” and “who listens?”

For Napolin, the experience of reading is undergirded by the sonic. The book captures and enhances literature’s ambient sounds, sounds that are clues to heterogeneous experiences secreted within the acoustical unconscious of texts. The book invents an oblique ear, a subtle and lyrical prose style attuned to picking up sounds no longer hearable. “Resonance” opens upon a new genealogy of modernism, tracking from Joseph Conrad to his interlocutors—Sigmund Freud, Frantz Fanon, W. E. B. Du Bois, William Faulkner, and Chantal Akerman—the racialized, gendered, and colonial implications of acoustical figures that “drift” through and are transformed by narrative worlds in writing, film, and music.

A major synthesis of resources gleaned from across the theoretical humanities, the book argues for “resonance” as the traversal of acoustical figures across the spaces of colonial and technological modernity, figures registering and transmitting transformations of “voice” and “sound” across languages, culture, and modalities of hearing. We have not yet sufficiently attended to relays between sound, narrative, and the unconscious that are crucial to the ideological entailments and figural strategies of transnational, transatlantic, and transpacific modernism. The breadth of the book’s engagements will make it of interest not only to students and scholars of modernist fiction and sound studies, but to anyone interested in contemporary critical theory.