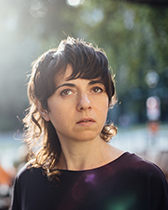 Erica Weitzman teaches in the Department of German at Northwestern University. Her research focuses on questions of ethics and aesthetics in the long nineteenth century. Her first book, Irony’s Antics: Walser, Kafka, Roth, and the German Comic Tradition (Northwestern University Press, 2015), explores the role of the comic in early twentieth-century German literature and its roots in romantic irony’s challenge to idealist thinking. She also co-edited the collected volume Suspensionen. Über das Untote (Fink, 2015), whose essays consider aspects of “the undead” as a figure that destabilizes both the life/death binary and the epistemological regimes that it structures. Her current project, At the Limit of the Obscene: German Realism and the Disgrace of Matter (Northwestern University Press, 2021), examines the concept of obscenity as a question of representation, perception, ontology, and affect in the context of the history of German realism from Stifter to Kafka.